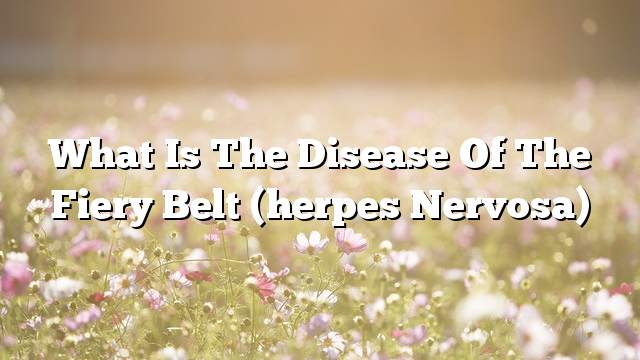 Herpes zoster / Shingles is a severe viral infection in the nerve and surrounding skin surface that is nourished by this nerve. It appears in the form of vesicles in the pathway of a particular sensory nerve, characterized by severe pain, This is why it is called a fiery belt, as it takes a specific part of the skin according to the injured nerve, such as a belt that separates this part, which is very painful and red as fire from the rest of the body.

The virus causing the disease is Varicella-Zoster Virus, the same virus that causes chickenpox. When infected with chickenpox for the first time, the virus remains in the nerve nodes of nerve assets for up to several years, and when it is reactivated The virus runs down the nerves to the skin in the form of herpes nervosa. The fiery belt can not occur without primary chickenpox infection. The cause of the virus is usually unknown, but it is associated with age (more prevalent over the age of 50) , Exposure to stress and emotion , Usually, the patient is infected with this fiery belt once in his life, it is rare that the incidence of repeated this disease twice or more, studies suggest that the incidence of this disease is relatively high; where the injured person out of every three people with the disease worldwide.

The varicella virus usually has one nerve on one side of the body, the symptoms of which appear in the dermatome skin area. The most common symptoms in the fiery belt are pain, stiffness, burning sensation, and sharp pain like intermittent sting. Other common symptoms include pain in the skin when touched, violent skin rash, and sometimes two or three nerves are affected by each other. The disease usually spreads on infected nerves that nourish the skin of the chest or abdomen, and the nerves of the upper face, specifically in the skin area around the eye, and usually the fiery belt takes the following pathway in the appearance of symptoms:

It is rare for patients to have complications of this disease, but it is disturbing and may affect the life of the patient in general, and the most important of these complications:

Fortunately, scientists have developed a vaccine for the virus that causes this disease. The best way to prevent this disease is to take these vaccines and follow some preventive methods to avoid infection: