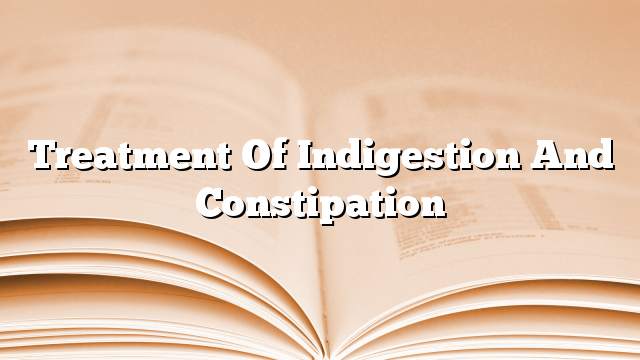 Indigestion is defined as a health disorder that affects the upper part of the stomach in particular. It is a feeling of pain, discomfort and swelling in the stomach, accompanied by burping, vomiting and nausea, and it occurs due to various reasons, most notably; a defect in the digestive system itself, or as a result of mental and neurological disorders , Or eating certain foods not borne by the stomach, in addition to the incidence of some diseases such as; chronic kidney infections and heart failure, as for the symptoms that appear on the body when exposed to indigestion, it is a feeling of permanent fullness and lack of sense of comfort and constant distress, nausea and bloating.

Indigestion is treated by determining the cause of the indigestion at first. There are simple cases that do not require treatment, and the conditions associated with the existence of a particular disease first need certain drugs or drugs, so as to reduce the secretions of the stomach, such as acids.

Constipation is defined as a digestive disorder; it results in an inability to remove stool from the body due to dysfunction of the bowel muscles or dryness of the stool itself; due to lack of fluid in the body or insufficient intake of fiber, and causes of constipation They are as follows.

As for the treatment of constipation, depends on the first reason. If the cause is related to a particular disease, it needs to treat the disease first, but if the reason is the diet, the treatment is changed, so that the foods are more contained fiber, such as vegetables and fruits, Beans, lettuce, and water and fluids, especially natural ones.