Home » Beauty and Makeup » How to get rid of defects in your nose without surgery? 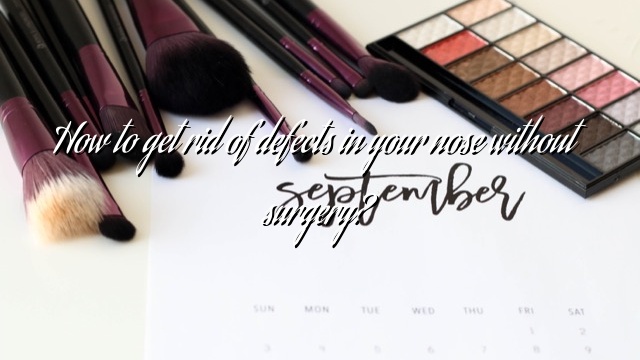 The nose occupies an aesthetic position especially for males and females alike. It is the middle of the face and is the most prominent facial features. In many cultures, especially Arabic, nose is one of the most important standards of beauty. Rhinoplasty is one of the most common cosmetic operations around the world because nasal deformities negatively affect a person’s psyche and affect his self-confidence and social interaction with others.

So many people seek rhinoplasty, but traditional nose-correction methods require surgery under full or local anesthesia, which many people fear, and the results of some surgeries have caused patients not to have it. In view of the recent development of cosmetic surgery and the expectations of patients to devise simpler cosmetic methods to help to give the desired results and avoid the risks that may result from anesthesia, has been invented a new way to beautify the nose without the need for surgical intervention.

This method has spread in the capital of Hollywood and has become popular in the world. It is summarized in the injection of an artificial natural substance known as Radiesse. This substance is made up of calcium hydroxylapatite materials similar to those of the bones of the nose.

Radiesse appears to be cream-like in combination with a water gel, making it smooth and natural, easy to inject. Its unique structure also provides immediate improvement and positive results that last relatively long. Radiesse is approved by the Food and Drug Administration (FDA).

This new method is used in many cases including lifting or straightening the nose and correcting some of the negative effects of the old surgical procedures. This method has been widely used in East Asian countries to correct and lift the nasal bridge to become more prominent and comparable to the emergence of European or Greek nose. It is also used to camouflage the apparent osteoporosis on the nasal bridge and hide the irregular back of the nose. In this way, the nose can also be camouflaged and repaired towards one side, in addition to its numerous uses in cosmetic embossing on the results of previous nose operations.

The most important advantages of this modern method of rhinoplasty are that it is simple and relatively painless, and does not require hospitalization, as it takes place in the clinic within a few minutes. It is also safe to avoid problems that may occur from anesthesia and you do not need to conduct a sensitivity test, and the problems after the injection is very rare, being a natural substance found in the human body (such as bones and teeth) does not require a period of hospitalization, where you can practice your work immediately after the injection and give immediate results A relatively long period (1-2 years) compared to other injection materials is an economical method compared to surgical costs and the prices of other injection materials, which last only a few months and require repeated re-injection.

The presence of redness and temporary swelling in the area will disappear within several days. What can not be adjusted in the nose by injection

Injections can not solve the problem of internal blockages and difficulty breathing nose, but injection is to improve the external appearance.

Warnings: The injections should not be injected with an intensive filler in the blood vessels. Use of injection with a substance Intensive filler in anyone with dermatitis or active infection should be delayed in or near the treatment area until the infection or infection is controlled. Did not prove safety and effectiveness to use in the lips. There have been reports of nodules associated with the use of injection with a thick filler injected into the lips.