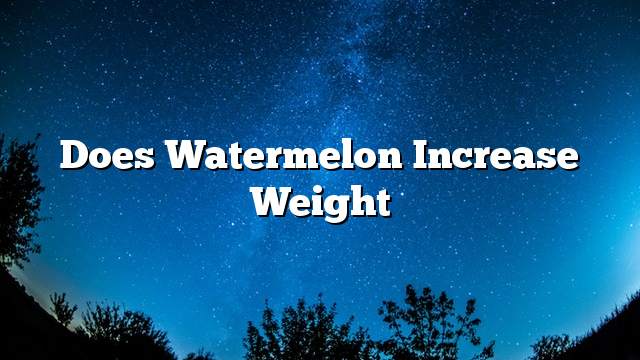 It is a member of the Cucurbitaceae family. The African Kalahari Desert is the native of the country, but it is currently cultivated in many tropical regions of the world. It is believed that the watermelon was first planted 5000 years ago. Egypt, and then spread to other places of the world, but now China is the first producer of watermelons in the world, followed by Turkey, then the United States of America, followed by Iran and Korea.

Watermelon is an excellent source of antioxidants, especially lycopene, ascorbic acid and citruline, which makes it a functional food that provides many health benefits including the prevention of many chronic diseases, Such as cardiovascular disease and cancer.

Many people blame watermelon for causing weight gain, explaining this claim that the melon contains large quantities of sugar, so this article aims to clarify the truth of this claim and talk about the impact of melon on body weight.

The following table shows the dietary composition of each 100 g of the edible part of the melon:

The above table shows that the watermelon consists of about 90 percent of the water, and it does not give too many calories. Each 100 grams of watermelon gives 30 calories and about 6.20 grams of sugars, so eating a portion of melons, The cup of watermelon cubes, which weighs about 190 grams, gives about 174 grams of water, about 57 calories and 12 grams of sugars, so it is considered a suitable diet for weight loss diets, because high-content foods contribute to increased feeling of satiety and fullness, Which contributes to reducing other amounts of food In addition, melon is a healthy food, it gives many essential nutrients, such as vitamin C, vitamin A, in addition to antioxidants, specifically lycopene, which gives many health benefits.

Although the melon has a glycemic index of 80, this assessment is deceptive, because low-carbohydrate melon content makes it difficult to eat the amount of food that is normally evaluated on the basis of the glycemic index, which is equivalent to the amount of food given to 50 g Of the digestible carbohydrates. In the case of melons, about 660 grams of carbohydrates should be consumed to get 50 grams of carbohydrates, a large amount that is not usually eaten. Therefore, it is possible to rely on the so-called glycemic load, which depends on the amount of change In blood sugar After eating the common ration of a given diet, the food is considered low-glycemic load if it is between 1 to 10, average when it is between 11 to 19, and high when 20 or more, and each 120 g of melon carries a glycemic load equivalent to 5 , Which means that its effect in raising the level of blood sugar is low, so in this regard also does not consider eating watermelon has an effect increases the chance of gaining weight.

The above can be deduced that the melon is far from the charges that it is accused of being overweight, and that it is considered a suitable diet for weight loss diets, and it is also considered suitable for those who wish to eat sweet food without getting a lot of calories, Of health benefits. However, it should be noted that any diet containing calories can contribute to weight gain if consumed in large quantities so that the total calorie intake is greater than the total calories burned by the body U Oh.